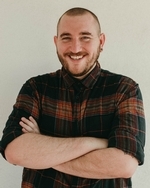 Receive Email Alerts from Me

While Jacob "Jake" Hylton is one of the few Phoenix-born that still lives in Phoenix, he has lived all across the Valley. A mix of having semi-nomadic parents and a passion for older homes led Jake to real estate as a career. It is his firm belief that all people deserve to have a chance at home-ownership and he strives to deliver the utmost integrity, care, and hardwork to every relationship he builds during the homebuying/selling process.

Before becoming a Realtor, Jake worked for a handful of technology startups and professionally for different theatre and live entertainment companies, ending his professional theatre work by touring with Sesame Street Live. In his free time, he is most likely found cooking, baking, being actively involved in his community, running a small theatre company with some of the coolest people he's ever met, watching Netflix (let's be real about it), or being a dogdad to the best doggo in the world, Ollie.